Posted on January 22, 2016 by historicalhorizons

This post originally appeared in The Twelve: Reformed Done Daily on January 15, 2016. 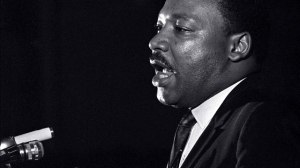 Although Martin Luther King’s birthday was actually yesterday, the United States will mark the occasion next Monday. Once more we’ll hear the familiar quotations rehearsed in respectful tones. We’ll see footage from the “I have a dream!” speech on the evening news, and we’ll be subjected to pious carping from opponents of affirmative action and Black Lives Matter that King himself scotched such initiatives in his vision of a color-blind society, the one where “people will be judged by the content of their character, not by the color of their skin.”

I’ve had quotations on the brain all week from a presentation I had to make on Abraham Kuyper to some new faculty and staff at my college. Fairly quickly the conversation got around to what has become Kuyper’s most famous saying among American evangelicals, namely, that “every square inch” belongs to Christ. I’ve used this space before to rehearse my objections to how this dictum is naïvely invoked by all and sundry. To recapitulate briefly: “every square inch” can be taken as our claim of possession—worse, of entitlement—as if all the earth belongs to us good Christians. In fact, Kuyper said, it belongs to Christ, a different proposition altogether. Plus, the philosophically informed physicist in the room this week pointed out that Kuyper’s original statement exercises a double negative which springs from a particular stream of continental thought and which is essential to its meaning: “There is not a square inch in the whole domain of our human existence over which Christ, who is Sovereign over all, does not cry, Mine!”

My own pet peeve is that this quotation typically comes without a hint of Kuyper’s strategic thinking, or—far worse—of Jesus’ own directives on the matter. In the first instance, “every square inch” can be taken to rubber-stamp whatever I want to do; after all, it’s all God’s work, and if it fits my ambition and salary demands, all the better. As to the second, here’s how Jesus dispatched his disciples into square-inch land: “I am sending you out like sheep among wolves. Therefore be as shrewd as snakes and as innocent as doves.” Finally, from Kuyper’s own angle, we should rehearse another word he uttered in the same speech in which the square-inch statement appears, so as to take due recognition of who occupies our brave new world: “It cannot be said often enough: money creates power for the one who gives over the one who receives.” American politics anyone?

In short, we cannot capture Kuyper in just one quotation, even if it’s his most famous. Same thing with King. Which leads me to wonder what statements might most aptly be rehearsed this MLK Day in addition to “I have a dream” and “color of their skin/content of their character”? Here are some for your consideration. Each and every one of them would get him pilloried today on hate radio. But that would be a bracing reminder of how King was reviled before assassination turned him into a nice safe saint on the American shelf of exemplary characters. These statements would get his picture back up on the billboard I used to see south of town in the mid-60s: “Martin Luther Communist,” illustrated with an air-brushed photo of King in a circle of known members of that Party. Probably an honorable place to be.

“A nation that continues year after year to spend more money on military defense than on programs of social uplift is approaching spiritual doom.” Given the fifty years that have passed since he uttered this one, and looking at the current politico-religious scene, I think it’s safe to say that we’re no longer “approaching” but have arrived.

Upset about all those angry voices protesting cops killing black kids—and the rioting that sometimes ensued? “I could never again raise my voice against the violence of the oppressed, without having first spoken clearly to the greatest purveyor of violence in the world today – my own government.”

Or take the American war of your choice. It’s been pretty non-stop action since MLK came out against the Vietnam War in 1967: “I am convinced that it is one of the most unjust wars that has ever been fought in the history of the world.… It has strengthened the military-industrial complex; it has strengthened the forces of reaction in our nation. It has put us against the self-determination of a vast majority of the Vietnamese people, and put us in the position of protecting a corrupt regime that is stacked against the poor.” More precisely about the cost of militarism back home: “This way of settling differences is not just. This business of burning human beings with napalm [drones], of filling our nation’s homes with orphans and widows, of injecting poisonous drugs of hate into the veins of peoples normally humane, of sending men home from dark and bloody battlefields physically handicapped and psychologically deranged, cannot be reconciled with wisdom, justice, and love.”

Then there’s this little foreshadowing about all the denunciations of Obamacare: “Of all the forms of inequality, injustice in health care is the most shocking and inhumane.”

But King was nothing if not relentlessly hopeful, even in the face of the direst prospects. Think a little about the hatemongers of fear and fascism working their lungs on the Republican electorate today. Then listen to King’s last words the night before he was gunned down: “I’ve looked over, and I’ve seen the promised land. I may not get there with you, but I want you to know tonight that we as a people will get to the promised land. So I’m happy tonight. I’m not worried about anything. I’m not fearing any man.” God send us a leader who’s not fearing any man. Oh, I think we have one. Black too.

Quotations. We need to cite more than the one or two that allow us to box a leader up for safekeeping and our own assurance. Just one more to conclude with, one that Kuyper said in just so many words as did King: “The end of life is not to be happy, nor to achieve pleasure and avoid pain, but to do the will of God, come what may.” Happy MLK Day.

This post originally appeared on The Twelve: Reformed Done Daily, the blog for Perspectives: A Journal of Reformed Thought.

The blog of the Calvin College History Department
View all posts by historicalhorizons →
This entry was posted in Jim Bratt and tagged Abraham Kuyper, history, Martin Luther King Jr, MLK, quotes, US history. Bookmark the permalink.