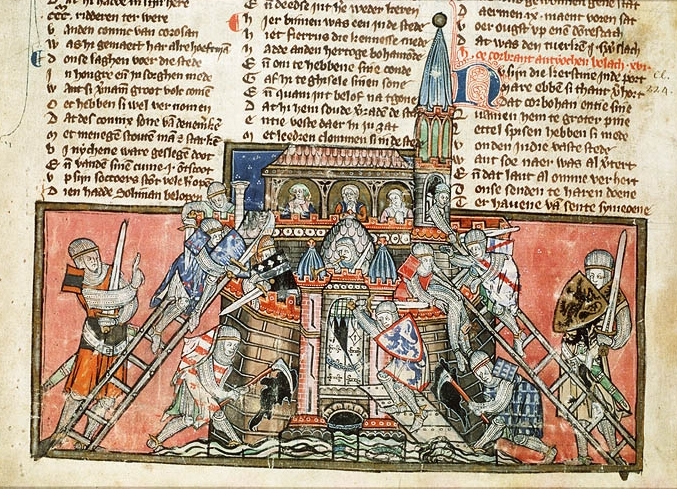 This entry comes from Coryn Mulder, a senior nursing student in Professor Karin Maag’s spring online History 151 class, responding to a final exam question about the value of taking a core history class. Her response is featured here with her permission. History 151 covers human history from the Paleolithic era up until the late Middle Ages. The prompt asked students to imagine a conversation with an aunt and uncle who questioned why taking a history survey class had any value at all:

I would tell my uncle or anyone else with that mindset that when I signed up for History 151 I thought very similarly to them. I didn’t have a spectacular distain for studying History, like many others I know, but I wasn’t exactly elated either. I thought the past was full of mostly really boring facts and stories broken up by an occasional interesting event along the way. However, studying history from the beginning of time to the 1500s has opened my eyes and surprised me in many ways.

I have learned much about specific events, people groups, and empires throughout the first 1500 years of history. Yet more than that, I have learned how to engage with the past and its overall themes. I can identify what causes empires to rise and fall, the effects of religion on society, the ways societies throughout time interact with one another and respond to threats and how they shape one another.

However, nothing has interested me more than learning about the development of Christianity and the negative impacts it has had on other people groups and societies. I was fascinated by the similarity of Christianity to Zoroastrianism. I was moved by the persecution Christians experienced at the hands of Rome. Though nothing has affected me more than learning about the ways in which Christianity has contributed to the suffering of others. While I had heard of the Crusades before, I didn’t understand them to the extent I do now. I see our culpability now, and how this long ago event influences relations between Christians and Muslims to this day. I was unfamiliar with the persecution of Jews in Medieval Europe by their Christian neighbors until a few weeks ago. It saddens me to know that the people claiming to know the goodness and grace of Jesus have caused some of the greatest harm. It is important, however, to have knowledge of the past and development of one’s religion. Having this more comprehensive understanding of Christianity will enable me to go deeper in my faith and shape my own worldview. As a nurse and future seminary student, I feel better equipped to engage with people of other religious backgrounds.

Nearly all that I learned in history was infinitely more interesting than I thought it would be. However, I admit that in ten years I probably won’t remember that Temujin was the leader of the Mongols, the similarities between Hammurabi’s Code and the Hittite and Biblical laws, or exactly what transpired during the Greco-Persian Wars, among other things.  I will, however, remember that every culture, every nation and every people group shapes one another.  The world is a much more connected place than it was centuries ago. I can hop on a plane and be anywhere in the world in a few days. We have a responsibility to our neighbors everywhere on this globe to love each other well and look to their best interests. Nations still go to war, religions still clash, catastrophic events still occur, and cultures still thrive and collapse. So for everything and all the circumstances that stay the same, I want to change the outcomes and the way future generations will read about us in History books. I’m not studying History to prevent the past from repeating itself, but to learn how to engage with it and shape the future.

Professor Karin Maag is offering her online History 151 class again this fall – there are still some open spaces for students to register for the course. The course is open to Calvin students as well as guests from other colleges, universities, or high schools. Contact the Registrar’s office at Calvin College or go to http://www.calvin.edu/academic/online/ to find out more.