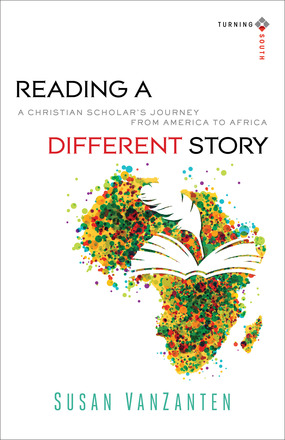 I’ve been reading a lot lately about “history and memory,” especially books of memoir. I am also advising two friends – one an award-winning peace activist, the other a retired college president – as they write their books of memoir. So it was with great pleasure that I read a memoir by an old friend, Susan VanZanten’s Reading a Different Story: A Christian Scholar’s Journey from America to Africa. It is a volume in the new series, “Turning South,” under the general editorship of Calvin College’s Joel Carpenter, and published by Baker Academic.

Like all good books of memoir this book is not mainly or simply about the life of the author (that would be autobiography), but about the connection between the writer’s own story and the subjects in which we are interested. So we follow Susan VanZanten through her stages of religious and intellectual development. We begin with her upbringing in a small rural community in Washington State and her conservative life in the Dutch-American Christian Reformed Church. We go along on the journey through the evangelicalism of Westmont College, to the high academic culture of Emory University, to the world-view rigor of Calvin College, and finally to the warmth of Wesleyan spirituality at her present home, Seattle Pacific University. She is now an Episcopalian, and her journey reminds me of another writer gone on the Canterbury trail, T. S. Eliot (who described himself as a person with a Calvinist heritage and a Puritan temperament). As Eliot said of himself, we might think of VanZanten, that the journey took her and him to various places, but, in the end, they came home, and knew the place for the first time. What did Susan VanZanten learn along the way, over a quarter century, from leaving Washington State and returning? How did a U.S. national, trained in American literature (her dissertation was on Moby Dick), become a scholar of African literature and an advocate of globalization in academic life, especially among Christian academics? This is an interesting story.

Her short (130 pages) and engagingly-written book would reward a person who might know that the world of religion and academics is changing rapidly, but who might feel a bit disoriented in locating oneself in a global culture that is being newly constructed on what Thomas Friedman has called “a flat earth.”

What Susan VanZanten leads us through, with scholarly precision and care for documentation, is this: we are encouraged to enlarge our places of origin – both spatially and psychically – and to make the acquaintance of new neighbors in our nearby-yet-global world. Under VanZanten’s winsome direction we are glad to meet the likes of, e.g., Chinua Achebe, J.M Coetzee, Martha Nussbaum, Charles Taylor, Antjie Krog, and Susan’s current research interest, the Nigerian writer, Ngozi Adichie. We readers sense our new kinship with the neighbors we didn’t know we had, and we are glad to make their acquaintance. Speaking for myself, I can’t wait for the first block party we’ll have. I look forward to the new food we’ll taste, the music we’ll hear and the dances we’ll learn (CRC-raised non-dancing people take note!).

As said above, Susan VanZanten began her life in scholarship with a dissertation on Moby Dick. In this book, which takes us to Africa, she surprises us by returning to Melville, but with a new perspective on an old familiar scene (T.S. Eliot, we hear you). Ishmael, our narrator in Moby Dick, tells us of the unlikely friendship he developed with Queequeg (a cannibal), a person very different from himself. When they have finally landed the whale, and the carcass is tethered to the side of the ship, Ishmael and Queequeg must work together. This a grim business, as Queequeg is lowered onto the dead animal to guide the hooks as the whale is ripped apart. Ishmael is bound to his friend for safety purposes by a rope tied to each of their belts. It is called a “monkey rope.” As VanZanten writes, “Humanity is inexorably linked in a vast chain of relationships that brings together cannibal and Christian, harpooner and bowman, grand captain and common sailor…. Moby Dick, often considered the quintessential American novel, is an exemplary global novel about the multiple monkey ropes of life.”

Therefore, for VanZanten and those of us who follow her lead, it is not so much that we in the West discover “them” as we all globalize. Rather, she engages and enlarges our Christian worldviews to realize what we’ve known all our lives, but now know more deeply: that all humans are image bearers of God and are our brothers and sisters. For us, there can be no “others” because we are already one; “otherness” is a construct imposed by a fallen world that divides people into artificial distinctions like nation, race and gender. Once we see (again) that we’re all on the monkey rope together, so to speak, we’ll know that we see each other the way God wants us to be.

If what I’ve written in these few hundred words seems appealing, read Susan VanZanten’s delightful book. As Tom Bodett says for his hotel chain, her book will keep the light on for you as you make you way back home, but recognize it in a new way. Besides you’ve got to get ready for the block party with the new neighbors where, with gratitude and grace, we’ll be all together and therefore be all we were meant to be.

Ronald A. Wells is professor of history emeritus. He is the author of History Through the Eyes of Faith and other books. He was an editor of Fides et Historia and of The Reformed Journal. With James D. Bratt he is co-editor of the book, The Best of the Reformed Journal. He is now mostly retired and lives in the foothills of the Smoky Mountains in Tennessee.