Today, I’m spending part of the day celebrating the July 4th Independence Day holiday. My neighborhood in Grand Rapids features the Hollyhock Lane Parade every year. It starts at 8:30am and has small floats, local and state politicians appealing to voters, kids on bikes and scooters, a historic fire engine, and the like. Classic Americana. I’m also spending part of the day working, doing some research.

One of my current projects is on extremist and radical politics in the US since World War II, looking at examples from both the Right and Left and comparing them to the mainstream. The book will have chapters on anti-Communists, defenders of segregation, SDS and the Weather Underground, the Black Panthers, and contemporary militia and white power groups.

What do “extreme,” “radical,” and “mainstream” mean for a nation founded in revolution? The South seceded and formed the Confederacy in 1861, appealing to the American Revolution to justify its actions. Only five years of bloody war preserved the nation. Radicals in the US on the Right and Left in the past 150 years likewise have appealed to the revolution and the right to overthrow unjust governments.

This summer I’m doing research on defenders of segregation in the 1950s and 1960s, at the moment analyzing the Citizens’ Councils, one of the more socially respectable organizations defending segregation. Like other segregationists, its members regularly appealed to our nation’s revolutionary heritage, as the cartoon “An Epitaph For Ike” shows.

The Citizens’ Council published this cartoon in May 1958. It depicts President Dwight Eisenhower as King George III. In the fall of 1957 “Ike” had put the Arkansas National Guard under federal control and sent paratroopers from the 101st Airborne Division to protect African American students trying to enroll at Central High School in Little Rock.

Governor Orval Faubus had done nothing to protect the students. Indeed, he had ordered the Arkansas National Guard to keep the students from enrolling at Central High, defying the Supreme Court’s rulings in 1954 and 1955 that schools in the South had to integrate and do so with “all deliberate speed.” 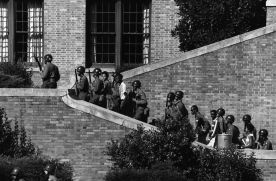 Opponents of integration, who feared “racial mixing” and appealed to “states’ rights,” depicted Ike’s use of federal troops as akin to events in the American Revolution. Ike was “quartering” troops in the South like George III had done in the 1760s and 1770s, in the decade leading up to revolution.

Segregationists also appealed to Southern memories of the Civil War and especially to Reconstruction after the defeat of the Confederacy, when victorious Union troops occupied Southern states and reformers, teachers, and federal officials tried transform the region—in particular promoting the rights of freed slaves, including the right of African American men to vote and to hold political office, and building schools and churches for them.

Cultural memory of the Civil War and Reconstruction in the South is divided. Most white Southerners saw Ike’s actions as a Second Reconstruction being imposed on them. Once again federal troops and Northern do-gooders were trying to take away the freedom white Southerners and subverting the Constitution. Many African Americans also viewed campaigns for school integration and for the right to vote and run for office a Second Reconstruction, but they considered it as the fulfillment of a promise rather than a repeat of a catastrophe.

This history leaves me with questions as a scholar and an American citizen. Part of the job of a historian is to understand people on their own terms. This does not mean accepting those terms, morally or politically. But it does mean treating people with sympathy, seeing them as fellow human beings like ourselves, rather than as monsters or bizarre. It’s easy for me to be generous in my analysis of those who promoted integration, particularly African Americans in the South. It’s harder with segregationists, even the relatively respectable members of the Citizens’ Councils, who repeated the nastiest of racist slurs against African Americans in The Citizens’ Council, in editorials, news stories, and cartoons.

As both a citizens and a historian, on the 4th of July I’m confronted with white Southern appeals to their region’s and indeed nation’s heritage. The way of life that the Citizens’ Councils defended in their campaign against racial integration had deep roots, in the colonial and Revolutionary eras. Ideals of states’ rights, of state sovereignty trumping federal powers, go back at least to debates over the legitimacy and meaning of the new Constitution of 1787.

Very few Americans in the 1770s and 1780s, in the North or South, imagined that the Declaration of Independence and new Constitution applied to black slaves or free African Americans. Even where slavery did not exist, in the North and West, African Americans faced pervasive inequality and segregation (however informal rather than legally imposed).

Saying this does not legitimize the efforts of the Citizens’ Councils and other white Southerners to defend their “way of life.” Nor does it affirm their view of our history. There always were counter-currents, already in the Revolutionary era, as some people did envision “life, liberty, and the pursuit of happiness” as applying to African Americans, Native peoples, and women. More than that, all heritages evolve. Traditions are living things. We’re not like Americans 200 years ago, in many ways, and that’s good.

For many whites in the South, the defeat of the Confederacy in 1865 and the end of Jim Crow in South in the 1950s and 1960s were tragedies. For many other Americans, especially African Americans, the tragedy is that it took so long to fulfill the promise of the Declaration of Independence. Some of that promise remains unfulfilled.

Finally, on the 4th of July, let’s not forget that the Pledge of Allegiance was written in 1892 by a Christian socialist, Francis Bellamy, who looked back to heritage of the Revolution and the Union cause in the Civil War and forward to true freedom in a socialist future. (Perhaps this is why libertarians on occasion have attacked the Pledge and its recitation as an un-American “slavish ritual of devotion to the state”!)

Can we reconcile ourselves, all of us, to this contested history and heritage, whether as historians who analyze it critically or as citizens who participate in it today? Do we have a common history?

Imagine the political divides among those who took part in the Hollyhock Lane Parade this morning. What versions of our American heritage do people in my neighborhood envision?

This is weighty stuff for a holiday.  Critical history of the sort that scholars write is necessary to understand conflicts over our history and heritage.  Wthout losing sight of these conflicts, we need ways to envision and together celebrate a common heritage.