Holy Week makes me nostalgic for Spain. While I was a college student contemplating a career as a Spanish historian, I had the privilege of spending four Easter seasons in Spain. I saw Holy Week celebrated in Seville, Cuenca, Zamora, and Salamanca. Few parts of the world have paschal celebrations to match these. Beginning on Palm Sunday, nightly processions of religious images and penitents wind through the city streets. They climax on Good Friday, when often the whole city seems to stay up through most of the night to commemorate Jesus’s crucifixion. 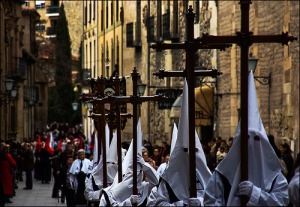 Much of the celebration is just raucous boozing. But at the core is a solemn commemoration of Christ’s passion. While some of the exuberantly theatricality grates on my Reformed Christian sensibilities, there is something deeply moving about these sensual communal rituals that our more sedate and inward-looking Protestant culture lacks. I do not revere images. Ornate baroque decoration leaves me cold. And I am downright revolted by relics (although as a historian they intrigue me). Yet standing in a crowd in Seville and hearing a local man break out into singing a mournful saeta beside an effigy of the crucified Christ can send shivers of devotion down my spine.

In one of my fondest Good Friday memories, from 1991, I am standing on a dark night outside a small parish church in Salamanca, in northwestern Spain, together with several Catholic nuns from the convent where I have been living (as a visiting researcher) for two months. We are watching a large effigy of Christ on the cross carried reverently and silently into the dark sanctuary, flanked by rows of hooded penitents with candles. For a moment I feel completely at one with this sea of Catholic worshippers, and I know that Christ’s sacrifice had the same meaning for all of us.

When I reflect on what it was that made this particular moment in 1991 the most memorable of all my Holy Week experiences in Spain, I have to admit that it was probably the least authentic part of the celebration: a woodwind ensemble played “O Sacred Head, Now Wounded” as the figure of Christ entered the sanctuary. This familiar German melody drew me into the spectacle in a way that the Sevillian saetas could not. It brought a beloved devotional text to mind, and let me imagine that all of us together were silently singing “Mine, mine was the transgression, but thine the deadly pain.”

But in its original form, Spanish Holy Week was quite different. It did not feature beautiful music written for church choirs (still less Protestant choirs). And much of the sentiment expressed in the streets was not quiet self-reproach but loud denunciation of others.

In medieval Europe, Good Friday celebrations often involved ritualized violence against minority Jewish communities. Passion plays written for the occasion reminded audiences that the Jews had been responsible for Christ’s death (a theatrical tradition revived most recently by Mel Gibson’s 2004 Passion of the Christ—a historical trajectory which helps to explain why that film aroused so much alarm from modern Jews). Bands of clerics and children carried out ritual attacks on Jewish quarters, stoning the walls of the Jewish ghetto and hurling insults at its residents.

As historian David Nirenberg has argued, this medieval Holy Week violence against Jews was not genocidal; nor was it the direct antecedent of the murderous pogroms of the fourteenth century or the Holocaust. It was ritualized and circumscribed violence. Jews were often required to stay indoors on Good Friday to avoid injury. Deaths were rare. Such “quasi-liturgical” violence was intended to keep the Jews in their place, not to exterminate them. According to Castile’s thirteenth-century law code, the Siete Partidas, the main justification for allowing Spanish Jews to keep their ancestors’ faith was so that they could “serve as a reminder to mankind that they are descended from those who crucified our Lord Jesus Christ.”

Still, this identification of the Jews as Christ-killers often did have murderous consequences. The persistence of blood libel, the accusation that Jews secretly practiced their own “blood rituals” that required murdering Christian children (in supposed imitation of the murder of Christ), was responsible for numerous attacks on Jews throughout medieval Europe, and became one ingredient of modern anti-Semitism. But that is another story.

By the late sixteenth century, when the popular Holy Week festivities reached their most elaborate form, Spain’s Jews were long gone. A famous edict of 1492 had required them to convert to Christianity or go into exile. The descendants of the converted Jews, or conversos, were sometimes harassed on Good Friday, but this ceased to be a regular part of the festivities. Other forms of ritual drama were devised to bring the passion story to life on the streets. The confraternities (religious brotherhoods) who organized the festivities vied with each other to build larger and more elaborate crucifixes, effigies, and other images. Some processed in the streets as flagelantes, whipping themselves until they drew blood, to imitate Christ’s suffering.

Only some of these elements survive today. I saw dozens of confraternities processing with their floats (some elaborate enough to be part of a Macy’s Day Parade), many dressed as penitentes, but no flagelantes. And I certainly never heard a word uttered about the Jewish role in the crucifixion. The Holy Week celebrations I observed were, like most preserved traditions, an eclectic mix of the old and the new, the authentic and the anachronistic. Had they been “truly authentic” (were that even possible), they would not have inspired me nearly as much.

Kate van Liere is a historian of early modern Europe, with particular interests in Spain, intellectual and religious history, and historiography. She has edited a collection of essays about Christian historical writing in Renaissance Europe. She also teaches in the Spanish and Dutch departments at Calvin and co-directs Calvin’s Rhetoric Across the Curriculum program.

9 thoughts on “Good Friday in Spain”