Sochi and the Lessons of Russian History

Posted on February 14, 2014 by historicalhorizons

Every so often, current events overtake a history class.  The event itself might be clearly historic—like the resignation of a pope. Or it can be the case that what’s happening in the present resonates so strongly with themes from the past that the professor and students put aside their study of history to sort out the headlines.  That would be the case right now if I were teaching my course on Russian history.  Unfortunately, the course isn’t being offered this semester.  So in the absence of students, I’ll share my thoughts here on how the Winter Olympics in Sochi reveal key themes in Russian history. 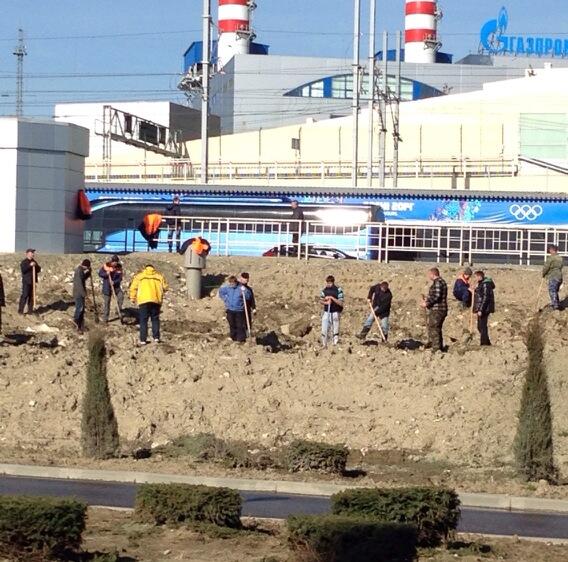 @ChrisKuk: “With opening ceremony of Olympics just five hours away, men are still hard at work in #Sochi”

Sochi as Potemkin Village.  In the 1770s and 1780s, the Russian empire seized the territory along the northern shore of the Black Sea from the Ottoman Empire.  Empress Catherine the Great tasked one of her former boyfriends, Prince Gregory Potemkin, with managing the development of the newly won lands.  In 1787, Catherine went to see the progress in the fertile region, the southern part of present-day Ukraine.  Wary of disappointing the sovereign, Potemkin ordered the construction of fake villages along the banks of the Dnieper River.  As the imperial flotilla made its way down the river, Catherine could see the facades of these villages in the distance and be satisfied that her realm was prospering.

In the days before the opening of the games, journalists arriving in Sochi tweeted photos of the shambolic accommodations and far-from-complete building projects.  You can find the photos at the Twitter account @SochiProblems.  My favorite image was that of the woman in a headscarf spraying what looks to be paint on brown grass outside of the Olympic stadium—putting the finishing touches on the Potemkin village.

How can a Potemkin village fool anyone today, in the age of Twitter?  The empress in the distance might be fooled for a while, but only until the peasants start Instagramming close-ups of the stage sets standing in for real buildings.  Indeed, in the days before the games began, the Internet lit up with photos of tap water that looked like liquid rust and hotel hallways strewn with debris and wires.  But what about now, with the games underway?  Even critics who regard the Olympics as a massive boondoggle admit that once the competition begins, they’re drawn to watch.  Sure, the tweeted photos of absurd plumbing arrangements bring a laugh, but they don’t captivate us like downhill skiing, or skeleton, or even curling.  Prince Potemkin was a clever operator.  Even after Catherine ended their affair, she kept him in the palace as her right-hand man (it’s said that he even managed the male harem that entertained the empress).  The organizers in Sochi might prove successful in taking a page from his playbook.

Sochi as a Russian Colossus.  When the International Olympic Committee awarded the 2014 games to Sochi in 2007, the choice seemed impossible.  The Winter Olympics in a city with a subtropical climate?  But in his personal appeal to the IOC, Russian President Vladimir Putin had insisted that Sochi was a unique place in the world.  “On the seashore, you can enjoy a fine spring day—but up in the mountains, it’s winter.” Putin, however, didn’t leave it to geography alone to distinguish these games.  The Sochi games have the most events, the most participating nations, and the most athletes of any Winter Olympics.  Putin’s government spared no expense in their preparations.  With a price tag so far of $51 billion, the Sochi games are the most expensive in history, surpassing the $44 billion spent on the 2008 Summer Olympics in Beijing.

The desire of Russian leaders to build on a colossal scale is a constant in the state’s modern history.  Since the time of Peter the Great, Russia has looked with envy at Western technological and economic development.  One strategy to match that level of development was to undertake epic projects that would exceed anything seen in the West.  England and Germany have more developed rail networks? Russia will build the longest railway in the world, across the length of Asia.  The United States produces more steel than any other nation?  Russia will build the single largest steel-producing facility in the world.  Western Europe and America are leading the world with aviation technology?  Russia will build the largest airplane ever to take flight.

One historian of Russian and Soviet technology, Scott W. Palmer, describes these colossal projects as “compensatory symbolism,” the attempt by Russian officials to surpass the West with a single, extraordinary accomplishment.  In many cases, these spectacular projects were riddled with blunders.  The first blast furnace at Magnitogorsk, the mammoth steel-production facility built in the 1930s, had 550 work stoppages in its first year of operation, and then it had to be completely rebuilt.  The world’s largest airplane actually did fly over Red Square in 1934.  But the 59-ton behemoth was so heavy it crumbled the struts that secured the tail wheels.  To solve the problem, engineers filled the hollow metal tubes with concrete.

Palmer argues that “compensatory symbolism” also served to hide the state’s economic and political weakness.  As commentators such as David Remnick have pointed out, these are the games of Vladimir Putin, an effort by the president to demonstrate Russia’s place on the world’s stage.  But Putin’s Russia today does not have the economic strength that it did during his first presidency (2000-2008).  Scholars of Russia predict that the Sochi Olympics will not bring the benefits that he hopes for.  “The Kremlin has built yet another shrine to inefficiency, recklessness, selfishness, and greed,” observes Lilia Shevtsova of the Carnegie Moscow Center.  Whether we compare it to a Potemkin village or one of those grandiose, symbolic feats of the Soviet era, Sochi will not be enough to hide the serious problems in contemporary Russia.  Is the ruler aware of this, as he presides over his games?  Or is even he duped by what has been created at his bidding?

Bruce Berglund’s area of focus in his doctoral studies was East European and Russian history.  He hosts the podcast New Books in Sports, which features interviews with scholars and journalists about their new publications on world sport.

The blog of the Calvin College History Department
View all posts by historicalhorizons →
This entry was posted in Bruce Berglund and tagged Olympics, Russian History, Sochi, sports. Bookmark the permalink.

5 Responses to Sochi and the Lessons of Russian History