Posted on April 22, 2016 by historicalhorizons

Heroes exist in the eyes (and prejudices) of their worshiper. The big heroes—the national ones—earn places on statues, plaques, buildings, and monuments. And a very select few are chosen to appear on the money. 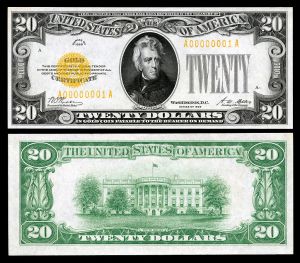 Since 1928 Andrew Jackson’s visage, with the swirling hairdo, has graced the $20 bill. When he first appeared his picture was as good as gold, for which the bill could be traded upon demand. Then he was reduced to being only as good as silver, before becoming mere paper in the 1960s. The president who destroyed the national bank and despised paper money has graced a Federal Reserve note. Go figure! Maybe, given the ironic and awkward situation, it is good that Old Hickory kept looking beyond the bearer’s right shoulder. Given Jackson’s facility with a pistol, having him looking away was likely safer.

Andrew W. Mellon was the second wealthiest man in America in 1928, and Secretary of the Treasury. The man who gave us Alcoa aluminum, though a Republican, selected a Democrat, Jackson, as the new face to replace another Democrat, Grover Cleveland, on the $20 bill. In a hyper-partisan era, like ours, that might sound strange, or remarkably enlightened. But on closer examination, it might actually make sense.

My insight comes from that noted political philosopher, Dr. Ben Carson. The good doctor is not enthused by the change in the currency. After all, he points out, Andrew Jackson did pay off the national debt, for the first (and only) time in the nation’s history. Mellon and his boss, Calvin Coolidge, were well on their way to matching Old Hickory’s fiscal feat, before the stock market crashed, the depression set in, and the Democrats took control of the government for twenty years. The nation has never been the same since. Balancing the budget for a year has been almost as impossible as retiring the debt. If retiring the debt was a good goal in 1928, there was good reason to honor the president who actually did it back in 1835. But the reason for placing him on the $20 bill then is not reason enough for keeping him there now.

Andrew Jackson once was a populist hero for both Republicans and Democrats. He was the frontiersman, the first president born in a log cabin, the Indian fighter (back when cowboys and Indians was considered child’s play). From humble beginnings, he rose through the ranks, both militarily and socially, ending his days living on a plantation, surrounded by fertile fields and slaves. In the Democratic Party of the 1930s, that latter truth did not cause much of a stir. Even Klansmen were able to occupy a space within the party’s large, crazy quilt tent. One of the country’s most prominent historians of the day, Arthur Schlesinger, Sr., portrayed Jackson as a forerunner of the New Deal, a Franklin Roosevelt of the frontier.

Andrew Mellon, Jackson’s promoter, owned the biggest bank in Pittsburgh and bankrolled steel manufacturers, coal mine operators, and railroad companies. Jackson hated big banks, especially the national one. Yet, Mellon believed in sound currency, as did Jackson. Mellon believed in government frugality, as did Jackson. In short, in 1928 Andrew Jackson was a convenient national hero, worthy of a place on the money and an equestrian statue in Lafayette Park, within sight of the White House, with Jackson’s challenge to secession—“Our federal union, it must be preserved”—chiseled into the base.

But as times change, so do the heroes. During the succeeding decades Jackson’s slaveholding became a major issue. His Indian removal policy lost its children’s game gloss to become an omen of genocides. Jackson’s street brawler, duelist ways moved from being elements of a strong character to being symptomatic of a dangerously volatile temper, an overly inflated ego, and a hyper-exaggerated sense of personal honor—traits more worthy of mobsters than politicians. Instead of being heroic, Jackson could be seen as unbalanced, if not downright disturbed, a view many of his contemporaries held of him.

New heroes come to the fore as the historical lenses inevitably readjust over time. What once was a still life of political and military leaders has become a landscape framing more people. Different pictures produce different heroes. When the end of slavery story expands to include the slaves themselves, and not just their white abolitionists, Harriet Tubman walks into the spotlight. She fought slavery without waiting for white approval. To say this is not mere political correctness; it is matter of accuracy. And if Jackson’s fame is diminished by such a correction, so be it.

As for keeping Alexander Hamilton on the $10 bill, consider this: The nation the United States is today owes more to Hamilton’s visions of how prosperity happens than it does to Andrew Jackson’s rejection of those ideas. The United States is what it is, at its best, because of Hamilton and despite Jackson. Hamilton was not a saint, but he knew how to apologize. Hamilton came to oppose slavery; Jackson embraced it. And Hamilton’s immigrant origins also speaks to another aspect of the national story, something that made the United States the diverse society it is today.

It is entirely appropriate for a nation to put its best foot forward on its currency, postage stamps, and monuments. If the American narrative is one of people of various backgrounds and opportunities using their abilities and opportunities to improve the lives of all their fellow citizens, the new collection of faces on the money will tell that story through the visages of heroic, flawed individuals who rose above their limitations, rather than being bound by them. In that light, Harriet Tubman is a welcome addition. As for Jackson, he will remain equally memorable, if not as honored, as he has been for the past two hundred years. Even as he fades from the $20, he will not be forgotten. Harriet Tubman deserves to be both remembered, and honored.

A mockup of Harriet Tubman on the $20 bill. Image source: womenon20s.org

Robert Schoone-Jongen is in his thirteenth year at Calvin College, working with student teachers who hope to become high school and middle school social studies teachers. His historical interests are immigration, American social history, and the presidency.

The blog of the Calvin College History Department
View all posts by historicalhorizons →
This entry was posted in Bob Schoone-Jongen and tagged $20 bill, Alexander Hamilton, Andrew Jackson, Harriet Tubman, history, US currency, US history, US presidents. Bookmark the permalink.