What’s in a Picture?

Posted on December 18, 2015 by historicalhorizons

Geronimo in a Locomobile Model C (not a Cadillac) at the Miller brothers’ 101 Ranch, 1905.

I sometimes use this image of “Geronimo in a Cadillac” in my history courses. It appears to be a relic from a racist time gone by. But it’s more than that.

The photograph was taken in 1905 at the “Oklahoma’s Gala Day” exhibition hosted by the Miller brothers’ 101 Ranch, located southwest of Ponca City, Oklahoma. To gin up interest in its exhibition, the 101 Ranch paid Geronimo to appear. The 101 Ranch staged the scene in the car for the press.

What should we make of Geronimo in the picture from 1905, dressed in a top hat and vest, sitting behind the steering wheel, with several other men dressed in Indian and mountain man clothing? A humorous curiosity, an Indian dressed up in a suit and sitting in a fancy car? Humiliation, an aging warrior and medicine man turned into a side show? Geronimo was still in captivity during these years. Was he forced by circumstances and the federal government to parade his defeat and satisfy romantic curiosity about Indians?

A song inspired by the photograph–Michael Murphy’s “Geronimo’s Cadillac” (1972)–provides one answer to these questions. The song is sung to Geronimo’s jailer, imploring him to free the imprisoned Apache leader. It laments how the United States stole Geronimo’s way of life, “Ripped off the feathers from his uniform.”

Geronimo (1905). Edward Curtis, who wanted to depict traditional Indian ways before they vanished, described him as a “historical old Apache.”

The song concludes on a “vanishing Indian” note of sorts–the idea that Indians were ill-suited to adapt to modern American life and their communities and culture were fated to disappear, victims of progress. America stole the freedom and way of life of Geronimo and his people, Murphy sings, and gave him a car for his troubles.

The red man is in the sunset too
Took all his land, now they won’t give it back
And they sent Geronimo a Cadillac

Murphy supported Indian rights. His song became an “unofficial anthem” of the American Indian Movement (AIM) and a Lakota family adopted him.

The song and AIM’s embrace of it point to elements of truth in Geronimo’s life and image. But there’s more going on. What we see is shaped partly by our expectations about Indians and Geronimo. It also was shaped by the man himself.

Geronimo (Goyaałé), 1887, the year after he surrendered.

Geronimo and the Apaches he led surrendered in 1886. The government kept them in military prisons in Texas, Florida, Alabama, and eventually Fort Sill in Oklahoma. In 1898, on a train ride from Fort Sill to an exhibition, where he was to appear, curious onlookers bought Geronimo’s hat and buttons from his clothing as souvenirs. Between stations he sewed on more buttons and sold them for 25 cents apiece. He also kept a stash of hats to sell and sold pictures of himself. He was a celebrity and marketed himself, even as others marketed him for their own purposes. He regularly appeared at fairs–notably the 1904 World’s Fair in St. Louis–and he rode a horse in 1905 in President Theodore Roosevelt’s inaugural parade. He used the event to meet Roosevelt and advocate for his people at Fort Sill.1 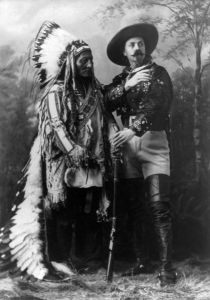 It is noteworthy that many Indians took jobs in Wild West shows and appeared in fairs, and early Western films. Some had fought in the Indian wars, as had Buffalo Bill himself, as a scout in the US army. Others had been educated as children in residential schools. A few became activists, working for Indian civil rights and for better treatment for their people on their reservation homelands. Sitting Bull, the famed Lakota leader, spent almost a year in Buffalo Bill Cody’s Wild West show. He liked Buffalo Bill. Cody paid his employees well and treated them decently by the standards of the time.

Native peoples had experienced defeat and conquest. In the wake of the “Indian Wars” they faced racism and policies of forced assimilation. Wild West shows offered economic opportunity and a chance for some to learn about the new world in which they and their people now lived.

Geronimo said this about his experiences at the World Fair, in an autobiography told to S.M. Barrett, Superintendent of Education in Lawton, OK:

When I was at first asked to attend the St. Louis World’s Fair I did not wish to go. Later, when I was told that I would receive good attention and protection, and that the President of the United States said that it would be all right, I consented… Every Sunday the President of the Fair sent for me to go to a Wild West show. I took part in the roping contests before the audience. There were many other Indian tribes there, and strange people of whom I had never heard… I am glad I went to the Fair. I saw many interesting things and learned much of the white people. They are a very kind and peaceful people. During all the time I was at the Fair no one tried to harm me in any way. Had this been among the Mexicans I am sure I should have been compelled to defend myself often.

Geronimo told his story carefully, clear in his interviews with Barrett about what he wanted to say. He had his own purposes. If we assume something similar about the photograph, then we should consider that Geronimo took part in staging it, rather than being passive as a prop used by someone else.

Consider that Geronimo is in a suit, not “Indian” clothing. Note his stern expression, as in the 1887 photo of him with a rifle. The other men in the car are dressed for a show, as “wild Indians” and a “mountain man.” Did Geronimo not want to play to a romantic image in this moment? Why did he choose to dress in modern American fashion for this picture and many more? Why did he assume traditional clothing in others?

What about the car? Few Americans had an automobile in 1905. Anyone in a car in 1905 was in some sense a curiosity. Geronimo was familiar with technology and with being photographed. Why not pose for a picture?

Geronimo remains a potent symbol today. Colleen Lloyd (Tuscarora) created this T-shirt image in 2001. It has been popular in “Indian Country.”

To affirm these questions is not to erase the traumas of Geronimo’s defeat, surrender, and imprisonment. He remained a captive and was buried at Fort Sill. Nor is it to reject the idea that he felt humiliation, sometimes, in selling his image at fairs, exhibitions, and Roosevelt’s inaugural parade. It is to see no more than humiliation and captivity in his later years, and in those of his people and Indian peoples generally in the US at the time. Circumstances left him few choices. Nevertheless, he took advantage where he could.

Geronimo and Native peoples were, like other people in the U.S., becoming modern. By 1905 some were using cars as a practical means of transportation. The experience of Native Americans has been distinct, of course, in that modernity came for them as part of defeat and policies of coercive assimilate. 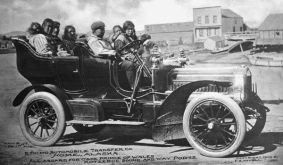 Several Native people in a car from the Eskimo Automobile Transfer Company, Alaska, 1905.

We should not see in the experiences of modernization by Native peoples only defeat and loss, even though that is central to their story at the turn of the century. To do so is to fall into a version of “vanishing Indian” mythology, the idea that authentic Indian traditions necessarily were lost in adapting to modern American life. It is vital to also consider how traditions survived and evolved and how Native peoples made aspects of modern American life their own. Otherwise we overlook part of Geronimo’s life and that of other Indians in his time.2

2. For more on Native Americans, tradition, and modern life, see Philip Deloria, Indians in Unexpected Places (2004). This essay makes extensive use his analysis of the Geronimo photograph and this thesis more generally. One chapters recounts the lives of Deloria’s great-grandfather, Philip Deloria, and grandfather, Vine Deloria, Sr. They were among the first two generations educated in residential schools, and both became Episcopalian clergy.  More generally, the book examines how Indians in the early twentieth century negotiated being Indian and modern and American. It includes chapters on Indians and sports, the film industry, modern technology, music, and more. On Indians in Wild West shows, see Louis S. Warren, Buffalo Bill’s America: William Cody and the Wild West Show (2005).

William Katerberg’s areas of focus are the history of ideas, the North American West, environmental history, and world history. He is the chairperson of the History Department at Calvin College and an Associate Dean.

2 Responses to What’s in a Picture?