The blog has been on hiatus for the summer. Most of the department faculty have been away on research trips or vacation, or buried deep in research. Summer is also a good time to catch up on reading, though; over the next few weeks, we’ll be featuring brief recommendations on great books and articles that we’ve recently enjoyed. 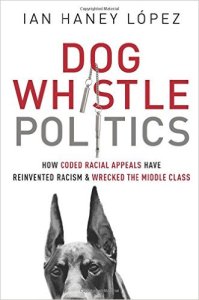 Recommended by Dan Miller: I just finished reading Dog Whistle Politics, by Ian Haney Lopez. The subtitle: “how coded racial appeals have reinvented racism and wrecked the middle class,” pretty much summarizes the book’s thesis. The author describes how, beginning with Barry Goldwater’s campaign in 1964, political conservatives became ever more effective at weaving subtle appeals to white voters’ racial anxieties (e.g. “states’ rights,” “welfare queens,” “Willie Horton”) into their electoral appeals. When challenged on the tactic, conservatives would deny that they had said anything at all about race and then go on the offensive, attacking their accusers of “playing the race card.” Lopez sees the Republican Party as the primary user of this tactic, which explains why in recent elections it has become overwhelmingly dependent on white voters, but he notes that Democrats have also sometimes adopted dog whistle politics (Clinton’s support of “three strikes” legislation, for example) to retain their shrinking portion of the white electorate. More commonly, Democrats embrace “color blindness,” promoting policies that favor the white middle class while downplaying efforts to address poverty and refusing to talk about the ways in which America’s racial history continues to shape our economic and social lives. The results, says Lopez, have been disastrous for people of color (e.g. mass incarceration) and for political liberalism generally because it has persuaded a large majority of white voters to support conservative politicians even though their policies (lower taxes on corporations and the rich, reduced funding for education and other public services) are antithetical to their own interests. What’s needed, he says, is a progressive movement that links efforts to address the continuing effects of racism to the broader concerns of middle- and lower-class Americans and is not afraid to denounce dog whistle politics.

“Our Puritan Heritage” by Jim Sleeper for Democracy Journal

Recommended by Jim Bratt: The Puritans were objects of scorn and dismissal already in their own day, much less in historical reputation. Yet they tend to experience comebacks, at least on the American side, when things start getting tough. It happened in the 1850s, in the 1930s, and might be happening again today, if this article is any indication. The author, Jim Sleeper, is a long-time leftie journalist, a teacher at Yale, and something of an heir to the New England Puritan tradition, just as were the voices in those earlier rehabilitations. He sounds the same themes that his predecessors did too—the sacrificial and communitarian aspects of Puritan life and thought. We’re used to hearing that from the Right more recently. So maybe our conventional categories are about to get stirred around a bit—always a good thing, and a typical result of historical thinking. Enjoy.

Check back in two weeks for our next summer reading installment. What are you reading right now? Drop us a line in the comments to recommend.