Book Note: The Deluge: The Great War, America and the Remaking of the Global Order by Adam Tooze 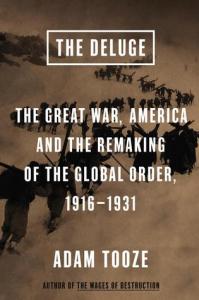 I was going to read Marilynne Robinson’s Lila over the semester break but I got waylaid by history instead. Of all the books on World War I published in its centennial year, it looked like Adam Tooze’s The Deluge: The Great War, America and the Remaking of the Global Order, 1916-1931 (Viking, 2014) might be the most interesting. So I dipped into it and got swept away by its remarkable tides and cross currents, with the result that there was no time left for Robinson. I’ll get to her someday, I promise. But since many more of you are going to get through Lila than The Deluge’s 500+ pages of text, I thought I’d reflect a bit on the highlights of this history, with a moral for its importance today.

Adam Tooze is British by background and taught some years at Cambridge, focusing on German history, before moving to Yale where he succeeded Paul Kennedy (author of The Rise and Fall of Great Powers) as director of Yale’s program in International Security Studies. This eclectic background, with immersion in the points of view of several different countries, helps lift The Deluge above the nationalist partisanship that can still mark this field. Then too, Tooze’s grand architectonic scale shows him well suited to succeed Kennedy on the heights of geopolitical interpretation.

With all its complexity, The Deluge tells as gripping a story as any novelist can wind, and achieves the nuance, color, strategic suspense, and finally tragedy of the best of them. It’s not a page-turner because there’s too much detail to be tracked, but on our deliberate pace through the volume, we can see again and again the stakes at risk, the choices to be made, some wonderful possibilities in play, and the machinery of calculation, now reasonable, now vengeful, that ultimately will control the board and lead to the doom that we, in retrospect, know is on the horizon.

No small part of the drama stems from Tooze’s choice of boundary dates. The conventional tale about World War I starts with Sarajevo in 1914 and ends with the negotiation of the Versailles Treaty in 1919. Tooze begins instead in the middle of the war on the strategic question of America and its money, and he ends with the world-historical catastrophe of 1931, when decisions about that money turned the banking crisis of 1929 into the Great Depression of the 1930s, at the same time abetting the triumph of the militarists in Japan over the peace and pro-American party that had held sway in that country for most of the previous decade.

For Tooze the key development, and legacy, of World War I was the migration of the center of world finance from London to Wall Street and the inability of Europe and the USA alike to adjust their politics, and even more their mythologies, to that cardinal fact. We see the mighty empires of Britain and France mounting incredible military efforts on the Western front of the war and just as mighty propaganda exploits at home, conducting a crusade that they insist will bring them glory, save their honor, and somehow lead on to a rich harvest of material rewards. All the while they were beggaring their treasuries and becoming absolutely dependent on American loans to tide them over for the next six months. In fundamental ways these were hollowed-out states left tempermentally confused when military victory brought much less than advertised. Even worse was the situation in Italy, proportionately the hardest pressed of the victors and the first to turn to fascism after the disappointments of peace. Likewise in Germany, where incredible sacrifice had ended in defeat at the front and near-starvation at home. Worst of all was Russia, where war gave over to two revolutions, bi-coastal invasions, and a civil war.

Tooze’s gift is to interlock developments at all these sites, and in China and Japan to boot, in a dynamic drama whose central question is, time after time—in each year of the war but then again in 1919, 1921, 1929, and 1931—“what would America do?” The longed-for answer in each case was two-fold: (1) forgive some of the debt that its allies had incurred so that these could lighten up on the reparations they were demanding from Germany so as to pay said bills; (2) to regard itself as a nation no more innocent or exceptional in character—however blessed by historical circumstance—than those whom they took as allies or enemies. The actual answer, Tooze demonstrates, was a consistent twofold negation of those hopes. First, the US insisted that all its loans be repaid, German economy and French strategic anxieties be damned. If this entailed as well radical deflationary policies or draconian tariffs that crippled world trade and prosperity, the Wall St.-Washington D.C. nexus cared not a whit. Second, the US prided itself—and Tooze shows this to have been true as much of the supposedly ‘realist’ Republicans as of the ‘idealist’ Woodrow Wilson whom they succeeded in power—on being above the play of interests and logrolling to which Americans attributed Europeans’ putative lust for war and revenge. Wilson first, but Herbert Hoover and Charles Evans Hughes (the 1920s’ most important Secretary of State) after him, simply believed that the United States did, should, and could run by different rules than everyone else.

The root of the tragedy of this long and definitive episode of world history, Tooze concludes, was not that the United States entered World War I, for perhaps it had to. Nor that, after the war, it became ‘isolationist,’ for it did not. The real problem was, as Reinhold Niebuhr would detail twenty years after the deluge of 1931 descended, that Americans entered deeply into the mess of world affairs believing themselves to be pure and above the fray. Unable to see themselves straight, they couldn’t see the world straight and so alternately passed by golden chances for really accomplishing a good turn or made things worse than they had to be.

A hundred years later, is it any better?

A version of this post originally appeared in The Twelve: Reformed Done Daily.