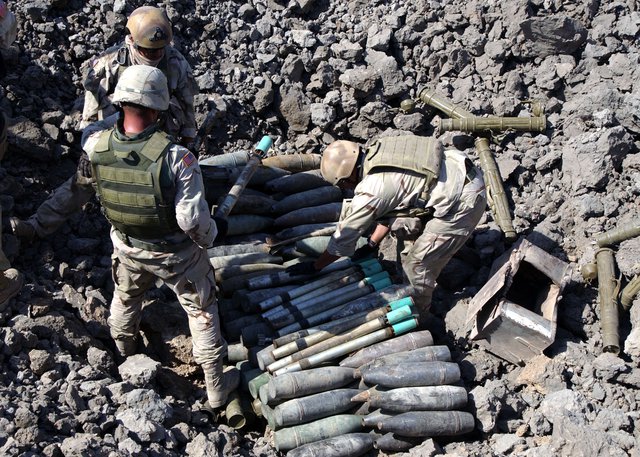 Although my Google Chrome home page is set to international.nytimes.com, I get my best news from Facebook. The New York Times is great, but it is so conventional, and the articles are so long! I just want to know what happened overnight, or what someone was thinking while I was asleep. For that, I count on my friends posting from BuzzFeed and al-Jazeera and all the blogs they read.

Then former Calvin history prof Randal Jelks, now at Kansas, tweeted this NYT article, “The Secret Casualties of Iraq’s Abandoned Chemical Weapons,” by C.J. Chivers, published October 14, and I decided I probably better read it before one of my colleagues or students asked me what was in it. So I read it on Wednesday, took me a couple of hours. It was really long, even by NYT standards—over 10,000 words. (It did have photos and videos.) It was a damning series of stories of Iraq veterans’ encounters with chemical weapons, and how the army and the administration of George W. Bush suppressed awareness of their experiences because they proved that President Bush’s rationale for going to war in 2003 was false. And the weapons, many of them, bore the stamp, “Made in the U.S.A.”

Imagine my shock the next day, Thursday, when I saw on Facebook a US News and World Report follow-up, headlined “I bet George Bush is feeling on top of the world today.” This piece, much shorter at about 450 words, claimed that the NYT article had “reignited a debate” about WMDs between conservatives and liberals. Conservatives “pounced” on the NYT story “as evidence that claims by Bush in the lead-up to the war that Iraq possessed weapons of mass destruction were true and that the United States’ 2003 invasion was justified,” while “liberal critics” were pointing out that “Chivers never said the bombs were the same WMDs that Bush described; they were from the 1980s and early 1990s.” By Saturday, October 18, the US News piece had over 140,000 likes, including childhood military brat friends of mine, some now serving in the military themselves—that’s how it showed up on my news feed. I took the hazardous risk of reading comments: Bush was a good president and a great American; his silence showed his humility and graciousness—you can criticize Bush for many things, but being a gloater is not one of them; why didn’t NBC, ABC, CBS and “all the other major news outlets” report this? They owe Bush an apology!

US News offered readers a poll: “What do you think? Do reports of WMD found in Iraq vindicate George W. Bush?” By Saturday, the poll had over 9,600 responses, in which “yes” beat “no” by a 2-1 margin.

To be clear: We all knew that Iraq had WMDs. There never was any “debate” about it. Saddam Hussein’s army deployed chemical weapons on the battlefield against Iran, in the 1980s. Remember the slogan? “He gassed his own people!” The debate was whether the Iraqi WMD programs still functioned, and whether it justified a U.S. invasion. President Bush’s administration rang the bells of war beginning in 2002, saying that Iraq had defied the U.N. sanctions regime (since 1991) by continuing to manufacture WMDs—even nuclear weapons, according to the suggestion of Condoleeza Rice, the National Security Advisor. It was time to stop inspecting and act! Remember the slogan? “He had twelve years to comply!” Alas, the weapons were not found. They were reported to have been destroyed by the Iraqi regime during the 1990s, under U.N. sanctions. (There is much more to this, but to get the full story you’ll have to take HIST 331, “U.S.-Middle East Relations,” with me this spring semester.)

What the NYT article reported was, “The discoveries of these chemical weapons did not support the government’s invasion rationale… The United States had gone to war declaring it must destroy an active weapons of mass destruction program. Instead, American troops gradually found and ultimately suffered from the remnants of long-abandoned programs, built in close collaboration with the West.”

What was really painful in the article was that the Iraqi regime disposed of these weapons so incompetently, and with such disregard for human beings and the environment, that years later American soldiers stumbled upon them where they lay, unwittingly, and in so doing brought great harm upon themselves. And prompted by the story, the U.S. army has now admitted that it failed to follow its own guidelines for the care of these men. They were not decorated for their wounds; instead, they were told to lie about what happened to them, and they were forgotten after their service ended. Many still suffer ill health.

So, simply pointing out what the NYT article actually says makes me a “liberal”? Okay, I can live with that. And I get it that we all might not have time to read a 10,000 word article, so we just read the 450 words and take the reader poll. That’s what Facebook is for! But before we go commenting on what a great president we had, or what the news media did or didn’t report, let’s go out to the car and read that faded and peeling bumper sticker. Remember the slogan? It’s only three words: “Support Our Troops.” So whoever it is that’s feeling on top of the world today, let’s remember what actually happened, wie es eigentlich gewesen (as Ranke put it), and find the courage to hold our own army and its commander-in-chief, and ourselves, to our moral commitments.

Doug Howard is a professor of history at Calvin College. He’s almost finished writing a history of the Ottoman Empire.

One thought on “History, Politics, and Those Pesky WMDs”