My blood is about 2.5 percent Neanderthal and 1.8 percent Denisovan. My colleagues and wife say they’re not surprised. The evidence indicates, however, that all non-Africans are about 2 percent Neanderthal and just under 2 percent Denisovan. These discoveries are fascinating stories, and they have been a challenge for scientists and theologians. They’re also very personal.

Those ancient Katerbergs seem to have migrated west from a refuge near the Balkans across Europe about 20,000 years ago, when the last glacial maximum ended. My ancestors on my mother side of the family, the ancient Visschers, arrived in Europe from West Asia sometime later, probably traveling into Eastern Europe and then Western Europe.

My story of ancestral journeys continues into the present. My mother’s family migrated from the Netherlands to Canada in the late 1940s, my father’s family in the mid 1950s, both looking for farmland for their sons. One of my aunts gave me digital copies of some documents related to my mother’s family’s immigration experience. This added recent sources to the ancient evidence I received from DNA tests.

More recent and ancient patterns in my DNA indicate that my genetic ancestry is found in a high percentage in northern Europe, about 45 percent. This likely points back to early hunter-gatherers Europe. I also share a significant component of DNA with people from the Mediterranean region, about 35 percent. Finally I have a notable portion of shared DNA with people from India and Central Asia, about 18 percent.

More specifically, the two closest reference populations for me, where my DNA looks most similar, are Danish and German. That evidence fits with what my father has told me about his family’s background. The Katerbergs migrated to the Netherlands from Germany in the 18th century, if I remember right. In the more distant past they migrated from Denmark to Germany, perhaps during the Thirty Years War of early to mid 1600s.

I did these DNA tests, and traced my ancestry back to the earliest humans who came out of Africa about 100,000 years ago, through the National Geographic Society’s Genographic Project. The story I’ve recounted here will continue to evolve as more people participate in the genographic project and National Geographic gets new information that allows them to chart my family’s journey more precisely. I can keep going back to the website for updates.

My motivation was partly personal, as a matter of simple curiosity. I also took the test because I am teaching a section of my department’s core course on world history before 1500 (History 151) in the spring of 2015. 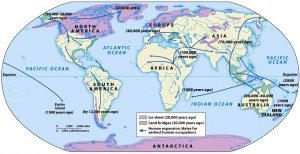 The course starts with our early human ancestors, the emergence of our own species, and their migration out of Africa and around the world by about 13,000 years ago. It’s a fascinating story for some students and disconcerting for others, even stressful, because of the religious questions it raises about biblical accounts of human origins. My hope is that, whatever their view of religion, science, and evolution, seeing the story of my ancestors will remind them that this evolutionary history is not an impersonal matter of academic research or intellectual controversy but part of our personal stories.

Our stories, even our creation stories, are not only about cosmic matters, or even familiar human history on a grand scale. They’re also as ordinary as ordinary gets, tracing back our family lines, from mother to mother, father to father, through the generations, thousands of them. The story told here is my family heritage, not mere fodder for debates between advocates of science vs. advocates of religious traditions.

The genotype project of National Geographic suggests that even the results of technical scientific scholarship can be personal and mythic. The science can trace back my ancestry through mitochondrial DNA and Y chromosomes and Haplogroups. But I find genuine truth in imagining ancient Katerbergs and Visschers traveling from Africa to West Asia, and into Europe, and from there to North America six and seven decades ago. The first among them were hunter-gatherers. They eventually became farmers, like my grandfathers who migrated to Canada with their families looking for land for their sons.

My students and I will not ignore cosmic questions in History 151 next February, nor the relationship between religion, science, and critical history. They will have opportunities to explore these issues and come to their own conclusions about them. But it’s useful for us to set aside big questions,  for a time, so we don’t forget to notice generation upon generation of our unnamed ancestors on their journeys.

This post is part of a series on Critical History and Sacred Tradition.