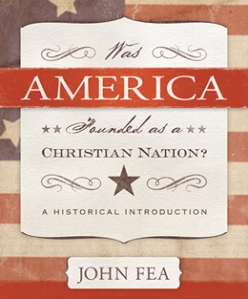 Was American founded as a Christian nation? That question is the title of a 2011 book by John Fea, an American historian who teaches at Messiah College in Pennsylvania. Like most questions about the past, the answer turns out to be complicated.

Fea was inspired (incited?) to write the book by encounters with evangelical Christians who seek “to reclaim what they believe to be America’s Christian heritage.”(xiv) Examples of this endeavor include the Vision Forum, which organized a 400th anniversary celebration of “Jamestown’s Legacy of Christ, Liberty, and Common Law;” Wall Builders, whose founder David Barton wants to restore an appreciation of America’s forgotten Christian heroes; and The Light and the Glory, a best-selling book by Peter Marshall and David Manuel that finds abundant evidence of God’s supernatural intervention in America’s early history.

Fea’s response begins with a discussion of how historians handle evidence. “The past,” he says, “is a foreign country.” We must let it speak in its own voice even if, especially if, it sounds very different from what we expected. That means we must avoid the temptation to cherry pick evidence to provide support for our own values and commitments, be they religious or secular.

From there Fea proceeds in three stages. First he traces the origins of the idea that American is a Christian nation. He finds that this idea is almost as old as the Republic itself. Pious New Englanders denounced Jefferson’s bid for the Presidency in 1800 because they feared he would undermine the nation’s Christian character. The providential rise of a Christian republic was the theme of several early histories of the United States. In the 20th century, America’s providential character and divine mission were taken for granted by both liberal and conservative Protestants, though they differed in what they thought a Christian nation should look like.

Unfortunately for the modern defenders of the idea, the story of Christian nationalism includes some unhappy aspects. Most of the early advocates of Christian nationalism were Protestants who thought that “Christian” excluded Catholics. Moreover the Civil War was in part a struggle between competing versions of Christian nationalism—a Southern version that rested on a literal reading of Bible verses that seemed to condone slavery—and a Northern version that identified America with the coming millennial kingdom of Christ. Abraham Lincoln was almost alone in considering the possibility that the “Almighty” might have purposes that differed from those of the contending parties.

Fea next considers the independence period and two documents with which it is associated—the Declaration of Independence and the Constitution—and asks whether the Revolution was a Christian movement. Here again, he gives an equivocal response. Ministers were vociferous in identifying the cause of American independence with the cause of Christ, but Fea finds that their arguments rested less on a careful reading of the Bible than on a careful reading of the mood of their congregations, and he suggests that their confidence that the War for Independence was a “just war” was dubious. Fea also notes that references to God in the Declaration are rather formulaic and they are absent from the Constitution. Which is not to say that the republican principles they embrace are incompatible with Christianity, only that their more immediate sources were English constitutional theory and Enlightenment discourse on natural rights.

Fea closes with an assessment of the religious convictions of the founders as they are revealed by their own writings and by the testimony of their contemporaries. Fea concludes that Washington was a man of great personal integrity but he was so reticent in expressing any personal religious feelings that some of his acquaintances doubted that he was a Christian at all. Fea admires him for lacking the anti-Catholic prejudice that was widespread among 18th century Protestants and rationalists alike. John Adams was also a man of high moral principal but he explicitly rejected many of the central tenets of Biblical Christianity and expressed a deep hostility for the clergy in general and the Catholic Church in particular for enriching themselves by exploiting the irrationality and gullibility of the masses. Of course, no one would mistake Thomas Jefferson for an orthodox believer. Fea faults him for a profound hypocrisy on the issue of slavery that evidently extended even to the sexual exploitation of one of his own slaves—Sally Hemmings. Fea’s take on Ben Franklin is that in addition to holding heterodox ideas, he cheerfully ignored some of the most basic obligations of Christianity such as duty to wife and family. He finds it ironic that modern Christians celebrate Franklin’s moralisms which have more to do with material aspirations than they do with the self-denying call of Christ.

Fea finally locates the Christian founders that modern Evangelicals hunger for in the persons of Sam Adams, John Jay, and John Witherspoon. They appear to be earnest believers but they appear too late in the story to change the overall impression that Christianity provided a rationale for a political movement that was really shaped by more worldly ambitions.