A few weeks ago a bumper sticker caught my eye on a pickup truck in a Best Buy parking lot. It read, “A government big enough to give you everything you want is a government big enough to take away everything that you have. –Thomas Jefferson.” I am no Jefferson scholar. I’m not even an American historian—my knowledge of Jefferson’s oeuvre barely extends past the prologue to the Declaration of Independence—but this “Jefferson quote” jumped at me, as I hope it would at any liberal arts major, as patently anachronistic. Of course Jefferson believed in limited government, but saw the greatest threat to liberty as monarchical tyranny, not the twentieth-century welfare state. And the sage of Monticello would never have used such condescending modern phrases as “giv[ing] you everything you want” and “tak[ing] away everything that you have.” Enlightened men of letters did not write like modern dads scolding acquisitive teenagers. 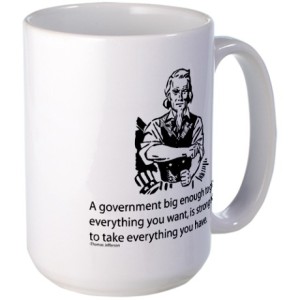 A quick internet search revealed a much more plausible source for this aphorism: its author is unknown, but it seems to date to the early 1950s, when it became popular with Republican politicians. One can appreciate the appeal of this warning against the dangers of unbridled state power during the Cold War.  Gerald Ford used it as a Congressman in 1954, and again as president twenty years later. Its false attribution to Jefferson is much more recent, probably a Tea Party invention. But now that you can buy this spurious “Jefferson quotation” emblazoned on coffee mugs, T-shirts, buttons, sofa pillows, and baby onesies, the misconception may continue to multiply.

In trying to track down the source of this quotation, I discovered that research librarians at Monticello have compiled an impressive collection of spurious Jefferson quotations. Mount Vernon’s website has a similar resource for spurious Washington quotations, as does Winston Churchill’s fan website. Abraham Lincoln may be the biggest victim of false quotations; in fact both Ronald Reagan and Barack Obama have quoted the same pseudo-Lincoln passage in presidential speeches. It must have been exasperation over all these fabrications that led Abe to utter his well-known warning, “The problem with quotes on the Internet is that it is hard to verify their authenticity.”

It’s not hard to see the irony in the internet’s dual role in such stories of false attribution. As “Abe” so wisely warns in that brilliant meme, the web makes it dismayingly easy for false quotations, like false information in general, to spread exponentially. But the web, used carefully, is also a rich mine of true information that can help us to unmask falsehoods. Didn’t I just admit to using it to ferret out the truth about that baffling bumper sticker?

Sadly, figures less popular than American presidents don’t always get the same corrective treatment. So I’d like to use this little corner of the internet to try to set the record straight about another Enlightenment writer, the English historian Edward Gibbon. 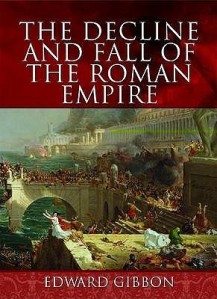 Gibbon’s History of the Decline and Fall of the Roman Empire, whose first volume was published in the same year as Jefferson’s Declaration, is one of the greatest historical works ever written. It also used to be widely read, but these days, although most educated people have heard of Gibbon, few read him. That’s understandable; he is learned and witty, but long-winded (the Decline and Fall fills more than a thousand pages) and not easy to digest. So it is no great surprise that bloggers, students, and others wanting to sum up Gibbon’s argument about why the Roman Empire fell rely on second-hand attributions. If you browse the web for Gibbon quotations on decline or decay, as many bloggers clearly do, you may well find these lines about the causes of “cultural decay” attributed to the great writer:

The five marks of the Roman decaying culture:

Concern with displaying affluence instead of building wealth;
Obsession with sex and perversions of sex;
Art becomes freakish and sensationalistic instead of creative and original;
Widening disparity between very rich and very poor;
Increased demand to live off the state.

When I first saw this bizarre set of bullet-points attributed to Gibbon, it provoked the same jarring sense of anachronism as the pseudo-Jefferson bumper sticker. These cannot be Gibbon’s own words. Yet a little Googling turned up the identical text attributed to Gibbon on in a wide range of websites, from the apparently reputable Affordable Housing Institute to a somewhat more dubious economics blog to an Evangelical jeremiad about pedophilia in The Baptist Press. All of them presented it as an exact quotation from the Decline and Fall.

How could this string of awkward phrases pass for the words of one of the best historical writers in the English language? Not only is the syntax completely unlike Gibbon’s magisterial prose style, but much of the vocabulary is wholly anachronistic. “Obsession with sex” may not be a modern phenomenon, but surely it is a twentieth-century phrase, as is “living off the state.” In fact, the word “obsession” does not even appear once in Gibbon’s entire Decline and Fall. Nor do “freakish”, “sensationalistic”, or “disparity.” Gibbon never used the word “perversion” in the context of “sexual perversion.” 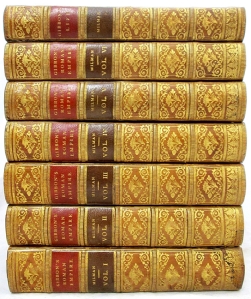 I make these claims not to show off my knowledge of Enlightened prose, but to suggest another way that you can use the internet to spot an internet fake. I don’t have the literary expertise to make all those assertions about Gibbon’s vocabulary from memory. But I can review Gibbon’s entire text, and search it for words or phrases, on the CCEL website, an indispensable electronic resource created by Calvin professor Harry Plantinga. (In the process of looking up this link, I made the nice discovery that one of my former students, Calvin seminarian and onetime History major Laura de Jong, has written the site’s brief introduction to the Decline and Fall.) Better still, you can read the whole text online if you can’t get your hands on a printed copy. All right, I know that is not realistic. I have not read the whole text either. But you can sample a chapter or two. If you are really interested in Gibbon’s broad explanations for the fall of Rome, try chapter 71, or the “General Reflections” chapter.

Even in these chapters, though, you won’t find Gibbon summing up the “causes of decline” or “marks of decay” as neatly as in the bullet-pointed pseudo-Gibbon. The real Gibbon expressly warned that “the complaints of contemporary writers, who deplore the increase of luxury, and depravation of manners” tell us more about their own anxieties than about reliable historical patterns. (Chapter 37) He was right. Like the Cold War warning against big government, the “five marks of cultural decay” listed here say much more about the fears of modern Americans than about those of their supposed author.

If it’s misleading to present Jefferson as a critic of modern socialism, it’s even further from the mark to depict Gibbon as prophet of cultural decline, or as a critic of sexual perversion, decadent art, or welfare dependency. The first and the fourth of these apocryphal five “marks”—the ones about affluence—bear some resemblance to Gibbon’s own account of imperial Rome; he did have a lot to say about luxury and misplaced wealth. But the main culprits in Rome’s decline, as he saw it, were not ordinary citizens misbehaving, growing dissolute, or creating bad art. They were degenerate and immoral rulers, foreign invaders, and (most problematic for modern Christian readers) Christian converts and clergymen.

Indeed, Gibbon had a deeply ambivalent attitude toward Christianity. While he praised the moral integrity of the early Christians, he did not hide his disdain for their “intolerant zeal” and “superstition.” And he argued (especially in Chapter 15) that the Christians’ zeal for the Kingdom of Heaven made them unreliable citizens and contributed to Rome’s military weakness in the face of barbarian invasions. This is one of the most difficult aspects of Gibbon’s argument for modern Christian readers to digest, and one that seems to elude many of the Christian bloggers who present these “five marks” as proof that a great Enlightened thinker shared their views about the inevitable connection between moral corruption and the decline of a great empire.

In short, Gibbon was not a committed Christian, a moralist, or a political scientist. He did not believe that one could systematically recognize the onset of “decline” or “decay” by observing distinctive patterns. He was a skeptical historian who reveled in historical ironies, and believed that historical trends that might seem morally good from one perspective might have undesirable consequences. He is a wise and witty observer of politics and society, but an unlikely godfather for most political parties.

With election season upon us, we should be on guard for spurious quotations that offer false ancestries for modern opinions. As nobody once said, “Good ideas should not need historical quotations to make them credible.”

Kate van Liere is a historian of early modern Europe, with particular interests in Spain, intellectual and religious history, and historiography. She has edited a collection of essays about Christian historical writing in Renaissance Europe. She also teaches in the Spanish and Dutch departments at Calvin and co-directs Calvin’s Rhetoric Across the Curriculum program.

3 thoughts on “The Trouble with Quotes on the Internet”