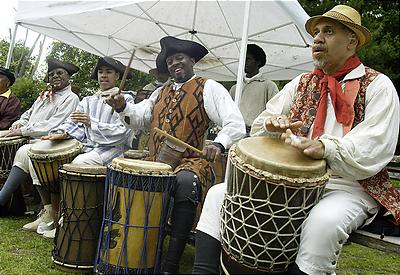 On Pentecost Sunday we are always reminded of the ethnic and geographical diversity of that day when the Holy Spirit was poured out to begin the church. But this year I was struck as well by the historical references on the occasion. In that first sermon by the Apostle Peter, he alludes to prophecies made long before by Joel and King David about “the coming of the great and glorious day of the Lord” (Acts 2:20). And that called to mind the surprising role that Pentecost played in one corner of colonial America. (Hey, I’m a historian. This is how my mind works. Beats counting the organ pipes back of the pulpit the way I passed sermon time as a kid.) I refer to Pinkster, the Pentecost holiday as celebrated in colonial New York by its African-American inhabitants.

On the eve of the War for Independence, these constituted some ten percent of the population of New York City, probably ninety percent of them enslaved. They formed a vital part of the city economy, yet loomed in white consciousness as a worrisome, potentially threatening presence. Episodes of intense racial conflict had erupted in the city twice in the first half of the 18th century, once in 1712, again in 1741, when (partly accurate) rumors of “Negro conspiracies” triggered draconian white suppression—executions, banishments to the West Indies (i.e., execution on the installment plan), and fearful vigilance by white patrols for weeks to come. Yet the enslaved were so important to the conduct of business that things had to return to ‘normal’ as soon as possible.

Amid these parlous circumstances an intriguing custom emerged—part festivity, part steam-venting, part parody, part religious celebration. ‘Pinkster’ (Pentecost) was a prime Sunday on the Dutch Reformed calendar in New Netherland as in the old country. If it was a devout religious occasion, it couldn’t help but double as something of a rite of spring. Easter lets surface echoes of old fertility cults; by Pentecost the hormones are riding high under the warm sun, into the late and long evenings. As West Africans arrived in increasing numbers in booming New York, their memory of similar occasions in their native cults met up with their Dutch masters’. The result was a New World version of the old rites of reversal long celebrated in Europe for a two-fold, and ambivalent, purpose.

On the one hand, on this day the downtrodden got—or seized—permission to party. Freed from work, they took to the streets to parade, dance, socialize, consume special foods and no few spirited beverages. They also took the occasion to elect the Pinkster King, who subsequently held status as an arbiter of sorts in their community—and who held forth with speech and gestures that clearly mocked the pomp and circumstance of white politicking and lordship. Their masters allowed it all, partly as a safety valve through which a year’s accumulated grievances could blow, partly as an ironic gesture toward the self-rule that they themselves demanded of their ‘betters,’ and eventually of the British.

I wonder how the pious folk and dominies of New York City regarded all this in light of the religious significance of the day. Their increasing distress over the day’s potential for riot and discord is evident from the historical record; by 1810, the authorities up river in Albany were banning black Pinkster altogether, just as their counterparts would clamp down on Guy Fawkes Day, a similar riotous street festival, further north in Boston. But while Pinkster still went on, what did sober Dutch Americans think? Did they draw any connection between what they saw on the street and what they heard read in church from the Book of Acts? Crazy people babbling and claiming possession by a holy spirit. Reciting ancient prophecies their forebears passed on to them about old people and young seeing visions and dreaming dreams of a new day of restoration and blessing. Acting so bizarre that sober folks chided them for being drunk by noonday. Did our pew-sitters see themselves, if only for an instant, as the Pharisaical critics in the Bible passage? It wouldn’t have been a stretch; after all, they were Dutch Reformed. Or was the craziness of the black Pinkster in the street too separable from the craziness of the Galileans in the upper room?

I wonder if a smart-aleck Dutch kid (a New Yorker, after all) tweaked mom or dad on just this point that noon at Sunday dinner. Not that I ever acted out thus in my own Grand Rapids youth, but back then, I just might have.

This post originally appeared in The Twelve: Reformed Done Daily.

One thought on “On Pinkster and Pentecost”