Once I had jury duty and ended up a jury foreman in a murder trial. The trial was unusual in that there were two defendants, two juries, and two defense attorneys. The victim was a drug dealer who’d taken money from a friend of the two defendants. They broke into his house to get the money back. Both had been drinking and taking drugs. 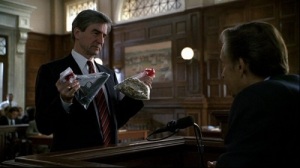 The trial was not nearly so exciting as those in the TV series Law & Order, with its clever criminals, wise-cracking cops, and the passion and flair of Jack McCoy and his team. But it was interesting for me from the viewpoint of a historian.

How would the attorneys deal with witness testimony and physical evidence? How would they construct narratives of what happened? How would they talk about “facts” and “truth”? And what would we jurors do with the competing stories about the crime told by the prosecutor and two defenders?

In his instructions, the judge kept emphasizing our obligation to be objective, to just look at the facts, and to not interpret things for ourselves. But this obligation was impossible. No one stuck to the facts, not the defense attorneys, nor the prosecutor, nor us in the jury. We couldn’t. We needed to decide whether prosecutor’s guilty story or the defender’s innocence story was true. That was the issue, not merely the facts and evidence.

One piece of evidence and how to tell a story with it struck me in particular. The victim was shot with his own gun. The confusing evidence was unused cartridges strewn around on the floor in the room where the defendants killed the victim. What did this mean? What did it tell us about what happened?

Neither of the attorneys explained the evidence and its significance in a compelling way. But one of the jurors in my jury was familiar with the kind of rifle owned by the victim. He had an explanation, one that he believed proved that our defendant, who used the victim’s own rifle to kill him, was guilty of first degree murder.

The kind of rifle owned by the victim is badly designed and cartridges easily jam in it, he explained. Our defendant must have had to eject jammed cartridges—repeatedly—while trying to fire the rifle and shoot the victim. He eventually was successful. This explained how the cartridges ended up on the floor and proved first degree murder.

My fellow juror argued that because the rifle jammed, repeatedly, the defendant had time enough to second-guess his actions. He could have stopped and ran, but chose to keep trying to fire the rifle until he killed his victim. He was guilty of first degree murder, not just second degree murder and felony murder (murder while committing a felony such as home invasion, theft, rape, arson, etcetera).

The evidence was circumstantial, simply a bunch of unused cartridges on the floor. No evidence was presented about how it got there, no testimony by anyone that the rifle had jammed that night or in the past, and no physical evidence from the rifle itself that it was likely to have jammed.

What were we to do, particularly when a defendant is presumed innocent of a specific charge unless the evidence is beyond reasonable doubt? This was a problem for the jammed-rifle narrative.

The jammed-rifle story was a plausible account of what might have happened. The historian in me was impressed. My fellow jurors were too. If I was writing a history of an event, this is the kind of narrative I’d suggest, acknowledging that it is speculative.

Was it enough to pronounce guilt?

The story was reasonable, but far from beyond reasonable doubt. It was not a fact. There were other plausible explanations, also speculative. The victim was a messy housekeeper. A box of cartridges spilled onto the floor during the chaos.

What about the first degree murder charge? Even assuming that the rifle had in fact jammed repeatedly, did that give the defendant time enough and reason to change his mind, the opportunity to realize that was he was doing was wrong, or foolish, and drop the rifle and run?

That struck me as nonsense. I imagined the defendant agitated, panicky, frantic, a jammed rifle in his hands. No time or capacity for second thought. In the jury room we debated this question. Some jurors agreed with me, others with the juror who’d suggested the jammed rifle narrative. Both sides could make a reasonable argument.

If writing a history of this crime, I’d present the various plausible stories and argue that the jammed rifle story fit the evidence, but could not be proven, and explain why I thought that it meant the defendant did not have time for second thought and was not guilty of first degree murder. But we weren’t historians, free to present multiple narratives and choose with appropriate degrees of caution which was more likely. We had to decide a man’s fate.

All told, the evidence was compelling enough to judge the defendant guilty of second degree murder and felony murder. We eventually reached a consensus that there was reasonable doubt about the first degree murder charge.

The experience confirmed for me that the stories we tell, in history books and murder trials, are of necessity interpretive. A jury does not judge only the evidence, though it should do that carefully too. It also must judge whether the prosecution’s story or defense’s story is more compelling. Juries split the difference sometimes, like we did, when prosecutor bring multiple charges. Sometimes juries can’t come to a consensus and the trial is inconclusive.

The difference between studying history and serving as a jury foreman at a trial is not one between the “ivory tower” and the “real world.” Historians and journalists do have more freedom, and perhaps more obligation, to withhold judgment. The job of a jury is to make a judgment, but they have this freedom and obligation too.

If we are leaping a long way to get from evidence to narrative and judgment, we need to be clear about that. Whether we’re historians or jurors.

2 thoughts on “The Historian at a Murder Trial”